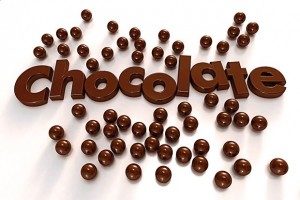 Hello all it has come to my attention here at The Pet Doctor that apparently that Chocolate Toxicity has been a growing issue in the canine community. I will be the first to admit that I’m am a food connoisseur and I love all things tasty, so I didn’t believe that something so delicious and widely loved by humans as chocolate was something toxic to my canine brethren. Naturally, I went to Dr. Daisy on the matter and she had to sit me down and educate me. I hate to say it, but it’s true. Chocolate is a dangerous, and worse-case scenario, fatal toxin if it is ingested by your canine family member. I know you are asking why chocolate is toxic to canines when you can enjoy it regularly. It’s because chocolate contains caffeine and theobromine, thee two things can cause serious medical complications for your pet. There are some things you need to look for if you know or suspect your furry friend has ingested chocolate:

If you suspect that your pet has eaten chocolate it’s common practice to induce vomiting. First things first you need to get to your vet for treatment. Your doctor will do a physical exam and a chemical blood profile, electrolyte panel, and/or urinalysis to determine if there has been a chocolate/caffeine overdose. Dr. Daisy would probably hook them up to an EKG monitor to monitor their heart rhythms as well. They will use medications to control seizures should they occur. In the best case scenario they will be placed on fluid therapy to keep them hydrated and flush their systems. When released they should probably be kept on a bland diet for a few days afterward. Which is a horrifying thought to be honest. The best treatment of chocolate is prevention. If at all possible keep your pet from ingesting the chocolate in the first place. Keep it out of your dog’s reach at all costs.

I know it’s kind of a scary thought thinking about toxins and stuff, but those are my findings this week! No chocolate for dogs, MORE CHEESY PUFFS!!!!!!!