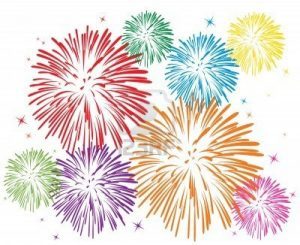 As the title suggests its summertime and things go boom! Apparently human beings throughout history have been fascinated with putting on a great show for people to be in awe over. Honestly, in my humble opinion they could have stopped after most food dishes were created, but that wasn’t enough for some. So not only were great works of literature and great plays were written, someone invented fireworks. To most humans this is a pleasing explosion of colors in the sky that take on many shapes and make various terrifying noises. To us in the canine world it’s equivalent to the end of our known worlds that makes the night especially dark and full of terrors if we aren’t accustomed to them. So, with the 4th of July coming up I decided it was my duty to inform you of Loud Noise (Fireworks) Anxiety.

This is a form of anxiety that is caused obviously by loud noises. Due to the time of year I will focus on fireworks, but it’s not limited to that. Loud noise from any source i.e. construction, demolition, trains, highway noises, and sometimes loud voices can induce this anxiety. Dogs show fear in a myriad of ways too, be on the lookout for signs.

If these signs are being shown to you it’s now up to you as an owner to make your pup feel better. First you should provide a safe place for them to go during the festivities. You could use their favorite closet they like to hide and play in or their crate. It creates the feeling of being in their own personal den and will help cut down on the anxiety. But, if the crate or closet is another source of anxiety for your pet then don’t use it during these situations, it would only worsen things.

Another effective method is desensitization to the sounds that cause issues for your pet. Play recordings of the sounds that scare them at low levels will providing positive stimuli. While petting them and/or giving them treats you should introduce the sounds to them. Over a period of time start to increase the volume until it becomes as loud as they would hear during the event at hand.

Another simple trick is to simply put them in a thunder shirt. It will give them the feeling of a calm embrace and it may cause enough of a distraction to lessen the anxiety. If that doesn’t work another great option is to go to The Pet Doctor or your local veterinarian and consult the professionals. If all other at home remedies fail then it may be time for assistance from a medication. Veterinarians don’t want your pet to suffer any more than you do so they will evaluate your pet and make sure they can handle a calming medication and start you on a regiment to assist you during events such as these. Don’t feel bad about having to use medication to calm your pet. When the sky goes “boom” it’s time to go “vroom” and see your local vet to make sure your pet isn’t going to be freaking out all summer long. That’s no fun for anyone.

Well those are my findings, don’t forget to make your calendars for the 20th of August so you won’t miss our annual Pet Pageant! Remember it takes place at the House Of Blues this year not at our facility. It starts at 3:00pm and last until 6:00pm. Come out and have fun, supporting your local rescue groups, eating good food, and jamming out with The Special Blend! See you there!