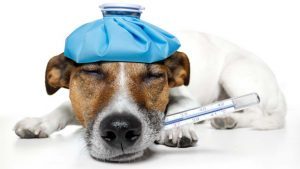 The Facts on The Beast

Influenza viruses belong to the family Othomyxviridae, and Canine Influenza is a Type A influenza virus. It can be further identified based on the composition of two specific proteins in the lipid outer layer of the capsid: Hemagglutinin (HA) and Neuraminidase (NA). Currently there are two strains of CI virus that have been identified in the United States, H3N8 and H3N2.

Influenza viruses in general have the ability to quickly change and give rise to new strains. These new strains could possibly infect other species. Both strains of CI can be traced back to strains that were infecting other species at some point. H3N2 was first identified back in Florida in 2004. It was cycling through racing greyhounds. Many schools of thought think this strain was developed from the Equine H2N8. Since 2004 this strain has been identified in most U.S. states and the District of Columbia.

H3N2 was first identified in March of 2015 after there was an outbreak of respiratory illness in dogs of the Chicago area. Previously the H3N2 was restricted to South Korea, China and Thailand. This strain is thought to have been a direct transfer from the Avian Influenza and was first discovered 2006-2007. After the initial diagnosis in Chicago H3N2 was reported in a number of states. In early 2016 a host of shelter cats in Indiana were diagnosed with H3N2. It was most likely transmitted to them from infected dogs.

Recently, in May of 2017 canine H3N2  was diagnosed in dogs in the states of Florida, Georgia, North Carolina, South Carolina, Texas, Kentucky, Tennessee, Missouri, Louisiana, and Illinois,

Currently there is no evidence of either strain being able to be transmitted to humans.

CI is transmitted through droplets or aerosols containing respiratory secretions from coughing, barking, and sneezing. Just like with kennel cough, dogs in places such as kennels, groomers, daycare facilities and shelters are at a higher risk for infection if a dog with the strain has been there. CI can be spread indirectly through objects such as the kennels, food/water bowls, collars and leashes. People who have been in contact with infected dogs can also spread the virus. It’s of the utmost importance to clean and disinfect objects that have been in contact with an infected dog to avoid further exposure.

The virus can remain viable on surfaces for up to 48 hours, and on clothing for 24 hours. On a person’s hands it can last up to 12 hours. So proper disinfection is key. H3N8 has an incubation period of 1-5 days and in most cases clinical signs show up 2-3 days after exposure. Dogs with H3N2 my start showing respiratory signs between 2 and 8 days after infection. Ironically, dogs are most contagious during the incubation period and they shed the virus even though they are not showing any clinical signs.

CI Virus infects and replicates inside cells in the respiratory tract from the nasal lining to the terminal airways. The inflammatory response to the infection can cause rhinitis, tracheitis, bronchitis, and bronchiolitis. CI results in the death of the epithelial cells lining the respiratory tract, this in turn exposes the underling membranes. This predisposes the respiratory tract to secondary bacterial infections that contribute to nasal discharge and coughing.

Virtually all dogs exposed to CI become infected with approximately 80% developing clinical signs of disease. The approximately 20% of infected dogs that don’t exhibit clinical signs of the disease can still shed the virus and spread the infection. This virus causes an acute respiratory infection in dogs. THERE IS NO SEASON FOR CANINE INFLUENZA, the infection can happen at any time of the year. This infection can resemble kennel cough.

The most common sign is a cough that persists for 10-21 days despite of treatment with antibiotics and cough suppressants. Dogs can either have soft, moist coughs or dry coughs similar to those induced by kennel cough. There can be Nasal and/or ocular discharge, sneezing, lethargy and anorexia may be observed. Many dogs develop purulent nasal discharge and fever. Some dogs exhibit the signs of pneumonia and increased respiratory rate/effort. Most dogs recover without incident, but there have been deaths reported from H3N2.

Diagosis of the disease can’t be done from clinical signs alone. Test such as virus isolation, immunoassays to detect virus antigens, PCR to detect virus Nucleic acid, and serology for antibodies specific to the virus. PCR is likely the most reliable test for diagnosis.

Treatment is best decided by your veterinarian. Treatment for most viral infections are largely supportive. Good nutrition will help your dog’s immune response. In most dogs it takes 2-3 weeks to recover from the disease. Your veterinarian will employ antimicrobials for known or secondary bacterial infections, anti-inflammatory medications to reduce fever and inflammation, and fluids to help correct dehydration/maintain hydration. To prevent transmission of the virus, dogs infected with H3N2 should be isolated for at least 4 weeks. ANTIVIRAL DRUGS TO TREAT INFLUENZA ARE NOT APPROVED FOR USE IN DOGS. ONLY USE MEDICATIONS PRESCRIBED TO YOU BY YOUR VETERINARIAN.

With all that said, the morbidity rate is estimated at 80%, but the mortality rate is less than 10%. Death occurs mainly in dogs with the severe form of disease. Currently no fatalities have been reported in felines.

The Pet Doctor To The Rescue

We’re here to let you know that in kennel, boarding, veterinary, and shelter facilities CI appears to be easily killed by disinfectants they commonly use. If you suspect your pet has been exposed, then after a visit to your vet Isolation is one of the best defenses against it.

Vaccines ARE available for bother the H3N8 and H3N2 strains of virus. A bivalent vaccine, which protects against both strains, is available. We at The Pet Doctor carry the Bivalent vaccine. It’s a 2 shot series, you get the initial vaccine, and then return for a booster in 3-4 weeks to offer a year of protection. Call to schedule an appointment today. If you have any questions call and schedule a consultation, we’ll gladly answer any and all questions about Canine Influenza and the bivalent vaccine that we offer!

For more information, check the links below: